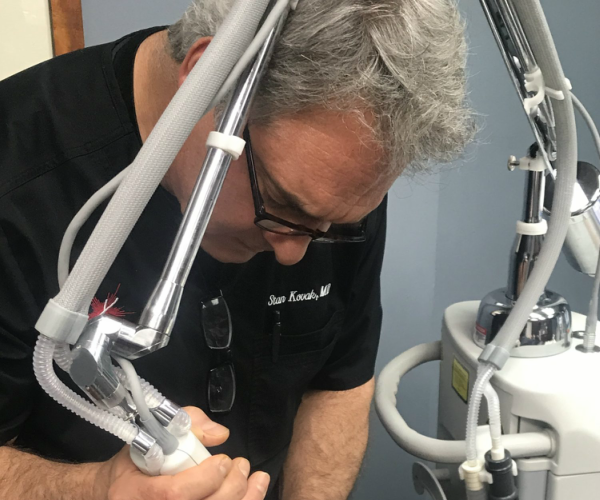 Today we’d like to introduce you to Dr. Stanley Kovak.

Dr. Kovak, can you briefly walk us through your story – how you started and how you got to where you are today.
It’s a pretty long story that goes back quite a while. I did my residency over 37 years ago in emergency medicine and worked in that for a while. As a young doctor, emergency medicine always brought a thrill and there was always something new and interesting going on, but I always felt the need to have more patient contact.

About 25 years ago I interviewed for a job learning how to treat varicose veins and spider veins. I accepted that job and found it very exciting. Improving the appearance of people improved not only how they looked but also how they felt. I received the greatest satisfaction from patients. I was then asked to go to a doctor’s office in 1994 to evaluate laser treatments for treating veins. Back in 1994, we just didn’t have the sophistication that we do nowadays for lasers, and the stage really wasn’t set yet to treat spider or large varicose vein with lasers. I was totally enthralled with the prospect of lasers.

I went to see Dr. Tina Alster, in Washington, DC at the Washington Institute for Dermatological Surgery. Back then lasers were in early stages of infancy for treatments. Tina had only 3 lasers and she was one of the biggest laser doctors in the country. There were only a few at the time that were really pursuing laser medicine, which we now call cosmetic laser or cosmetic medicine. She was offering fellowships at the institute, so in 1995 I applied for a fellowship and was accepted and started training in cosmetic lasers. It was a year-long residency but after 5 months Tina told me she couldn’t teach me anymore. It was a compliment that she told me at 6 months that I should go on my own, that I had done well.

The Washington Institute for Dermatological Surgery at Georgetown University gave me my diploma and fellowship. It was a little scary at first because all of a sudden, you’re left on your own, starting on your own and don’t have that security behind you.

We started off by opening up our first office in January 1996. We focused on the basic premise of giving the best service possible, understanding what we can do for patients and we ultimately prevailed. We initially started off leasing lasers and realized quickly that it wasn’t the way to do it. Many times, a patient wanted to get something done now, and if we didn’t have the laser available at that time, the patient would go on to some other place or just decide not to do it. We then decided to invest in lasers and before you knew it we had 20-something different devices in the office.

As we continued to grow, we still kept the same premise. We call it the ‘Nordstrom Philosophy’ – we do the best for our patients and try to make them as happy as possible just like Nordstrom the store does for their customers. I kept learning about lasers and cosmetic medicine because everything kept evolving. I made sure I kept up to date and went to conferences, and eventually, since I was one of the earlier people involved in lasers, I became more expert with it. Things like fillers came out and I went and learned about them by calling up the doctors that wrote about these subjects because in those days courses weren’t offered on these subjects.

I would fly around the country to different offices, whether it was east coast or west coast, and got specific training in things like Botox which was brand new in the 90’s and had yet to be approved to treat wrinkles. But there were doctors using it for wrinkles, so I went out to California and was met by Dr. Ernie Klein, who was considered the cosmetic dermatologist for the stars and he trained me on Botox and fillers. I learned his technique and expanded on it and eventually, I became a trainer for filler companies and Botox and as I kept working on expanding my knowledge. I focused on that instead of the business aspect.

My brother came into the practice and helped me by focusing on the business side. As a physician, you are pulled in both directions but you need to keep focused on advancements in the fields and on the patient. By doing that I was able to focus on constantly improving my knowledge and skills. As treatments for fat came out, I tested every single one of them and even tested them on myself. I essentially said, ‘if it’s going to work on me, it’ll work on the patient.’ Eventually, I decided on CoolSculpting.

Unlike most places, CoolSculpting had a program for advanced training. You were initially trained by a representative that they would send along with the machine, and then there was advanced training out in California which I decided I wanted to go and participate in. As a physician, I want to be involved in all aspects of care. I learned as much as possible about CoolSculpting and brought that back to the nurses and focused on improving on what they taught us.

We didn’t want to limit ourselves to what we had been taught so instead we tried to keep building on that knowledge, and that’s how things should go if you focus on care. Over time, we became the experts on CoolSculpting and fillers and created a happy following. Sometimes we run behind at the practice because we spend so much time with a patient but I think it is important to give as much time is needed to each patient.

Great, so let’s dig a little deeper into the story – has it been an easy path overall and if not, what were the challenges you’ve had to overcome?
There’s no such thing as a smooth road. At times you struggle and at times you don’t. It is a practice that depends on whether or not people have the extra funds to spend on improving themselves. We do live in a society where people want to look good and feel good about themselves, and it does make you feel good when you have a nice new pair of shoes or a new dress.

The way you look makes you feel confident, so we try to help people achieve this. Times can be tough and we have taken out loans to pay for employees and went through times when the administration hasn’t gotten paid. However, in the end, it has been a slow, steady rise in the number of patients we see. It has been interesting and a lot of fun.

Please tell us about Kovak Cosmetic Center.
We do anything that is considered cosmetic. We initially started non-surgically and then this last year we have added a facial surgery specialist to our practice who does cosmetic facial surgery. We are well known for our fillers, Botox, and lasers. Doctors have sent their patients from around the country to our office for our expertise in lasers. We try to choose the best of the best and make an informed decision on what lasers to bring into the practice.

We are known for our honest approach, we tell people exactly what to expect and don’t try to over-sell.

We are known as a family business seeing as everyone we have in the practice is considered family. This makes the patients feel comfortable because they can tell that our staff is happy and trying to be helpful. I think our staff is very unique. They focus on patient care and I think this sets us apart from other practices.

All our procedures are done by the doctors or the nurses – we don’t have any technicians who do treatments or doctors who simply sign the charts. We are extremely hands-on and it allows us to become experts in our treatments, which in turn keeps our patients, doctors, and staff happy as well. When you have that, your staff continues to improve day by day, because they continue to learn. Every year you get better results, improvements on better treatments. We use our knowledge and experience on lasers and improve on the basic techniques we learned from the representative in order to get the best result. I think that sets us apart. We are patient-oriented and our physicians focus on them rather than on the business aspect.

How do you think the industry will change over the next decade?
We are going to see an improvement in all aspects of laser treatments, whether it’s for fat reduction or longer lasting fillers. Really the next big change in cosmetic medicine is going to be with skin tightening. There have been big advances since I began practicing. There are now treatments that provide some skin tightening, but nothing really major.

The older generations lived a more active lifestyle and when you are more active you tend to look more active. I hope to see advancements in skin tightening and skin rejuvenation. There are always new ways of doing things, and I am hopeful that eventually there will be not only laser treatments but also genetic treatments that will improve aging. I think all this is around the corner and I see this industry continuing to improve and evolve, just like we do at our own office.

This article originally appeared in VoyageChicago

CONNECT WITH US ON SOCIAL!

*Results can vary based on patient. The material contained on this site is for informational purposes only and is not intended to be a substitute for professional medical advice, diagnosis, or treatment. Always seek the advice of your physician or other qualified health care provider.

By Appointment Only.
We follow the CDC guidelines.
Call for more information.

This website uses cookies to improve your experience while you navigate through the website. Out of these cookies, the cookies that are categorized as necessary are stored on your browser as they are essential for the working of basic functionalities of the website. We also use third-party cookies that help us analyze and understand how you use this website. These cookies will be stored in your browser only with your consent. You also have the option to opt-out of these cookies. But opting out of some of these cookies may have an effect on your browsing experience.
Necessary Always Enabled
Necessary cookies are absolutely essential for the website to function properly. This category only includes cookies that ensures basic functionalities and security features of the website. These cookies do not store any personal information.
Non-necessary
Any cookies that may not be particularly necessary for the website to function and is used specifically to collect user personal data via analytics, ads, other embedded contents are termed as non-necessary cookies. It is mandatory to procure user consent prior to running these cookies on your website.
SAVE & ACCEPT

Fill this in to claim your free Emsella trial treatment offer:

One step away from receiving $1,000 off CoolSculpting!