Stand up to the line with Dysport® (abobotulinumtoxinA) for Injection, a prescription for temporary improvement in the look of moderate to severe frown lines between the eyebrows (glabellar lines) in adults less than 65 years of age.

Dysport treats moderate to severe frown lines between the eyebrows by reducing specific muscle activity. Wrinkles are caused by repeated movements and muscle contractions, which means they can even develop in younger adults.

The results from Dysport can completely change the way that your frown lines look. The injection will smooth out lines, reduce the appearance of tiredness or anger that’s often associated with prominent frown lines, and make your face look more youthful overall.

At Kovak Cosmetic Center, we’ll help you to restore smoothness to your face without limiting your ability to express yourself. 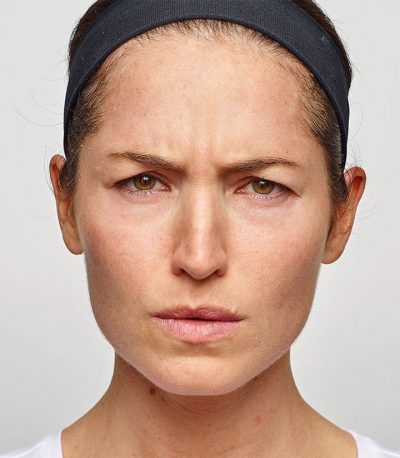 For temporary reprieve from frown lines with no downtime, get in touch with Kovak Cosmetic Center today, or read on to discover more about Dysport, how it can help you, and what you can expect from the cosmetic treatment in Chicago.

HOW DOES DYSPORT WORK?

One Dysport injection into each of 5 points between and above the eyebrows temporarily prevents muscle contractions that cause frown lines, leaving the rest of your face to move naturally. In other words, no frozen look, just natural-looking results. You can control your look instead of your look controlling you.

Do you want to reduce the frown lines between your eyebrows without freezing your expressions? Dysport is an innovative treatment designed to do just that! With Dysport treatments in Illinois, you can minimize frown lines without losing the natural movement of your face – achieving a smoother, fresher appearance that looks natural.

If you don’t want to go down the route of surgical treatment or invasive procedures, but really want to gain a more youthful facial appearance, then Dysport could be the perfect choice for you. Dysport is a popular injection that can effectively smooth severe and moderate frown lines in men and women, all in just a single appointment! If you’re tired of frown lines defining the appearance of your face, then you could say goodbye to them in minutes.

How Do Dysport Injections Work?

Dysport is a prescription injection that temporarily reduces the activity of nerves in muscles. The main substance in Dysport that enables the injection to lower muscle activity is botulinum toxin type A, making Dysport a form of botulinum injection, similar to Botox.

The injection can be used to treat muscle spasms in different areas of the body, such as toes, elbows, and fingers. Severe neck spasms, a condition known as cervical dystonia, can also be treated with Dysport. Cosmetically, Dysport is an effective treatment for facial wrinkles, and frown lines in particular.

Only five injections are required to treat frown lines: positioned above and between the eyebrows. The injections will stop the muscles contracting, without impacting the natural movement of your face, ultimately creating a natural-looking reduction in wrinkle prominence without freezing your features.

Who Is the Perfect Candidate for Dysport in Chicago?

Dysport is suitable for many people who want to see a reduction in the prominence of moderate to severe lines between their eyes.

The injection is a popular choice for both men and women with concerns over the appearance of frown lines. However, there are some exceptions that may mean Dysport is not the right choice for you. The injection is not suitable for people over the age of 65 or anyone who has an infection in the injection area.

When you visit Kovak Cosmetic Center in Chicago, Illinois you’ll have the opportunity to discuss any existing medical conditions – such as heart disease, diabetes, and asthma – that may affect your suitability for Dysport. During a consultation, your physician will make sure that you’re suitable for the treatment and that it’s the best choice for you.

What Happens After Dysport Treatments?

Unlike many cosmetic treatments, after a Dysport injection in Chicago, Illinois there is absolutely no downtime. Immediately after the procedure you’ll be able to get on with your day, return home or go to work – you could even schedule a Dysport appointment in Rockford or Oakbrook Terrace, IL during your lunch break!

It’s best to avoid very vigorous activities for the remainder of the day, but normal activities are fine. The only noticeable signs of the cosmetic procedure may be a slight swelling, bruising, or redness in the area where you had the injection. The swelling and redness should fade quickly, but it may take a little longer for the bruising to go down.

How Long Does the Dysport Procedure Take?

After you’ve had your initial consultation with a physician at Kovak Cosmetic Center and you’ve decided that Dysport is the right option to achieve your desired results, you can start looking forward too much smoother skin in virtually no time at all.

The whole procedure only takes between 10 – 20 minutes, so it can be worked into even the busiest of schedules.

Once you’re settled and comfortable, the procedure will involve five injections, and then you’re done – it really is as easy and fast as that!

Are the Results from Dysport Long Term?

You won’t have to wait long to see the results for yourself after treatment! In around half of patients, the results from the treatment start to become noticeable just two to three days after the procedure, but don’t be alarmed if it takes a little longer.

Dysport is a temporary solution to frown lines between eyebrows, so the results aren’t going to last forever. Typically, you can expect the restored smoothness to your skin to last up to 4 months, although this does vary.

If you can’t get enough of your new look after the procedure, then you can arrange for a second Dysport treatment in Chicago, once it’s safe to do so.

Results from a second treatment can be similar to the first, refreshing your appearance whilst retaining the natural look and movement of your face.

Contact Kovak Cosmetic Center in Illinois to discuss when it’ll be possible to book a repeat treatment, or to speak to one of our expert physicians about whether Dysport will help you to achieve your desired results. If your confidence isn’t what it should be because you’re unhappy with lines on your face, sagging, or lack of volume, then Kovak Cosmetic Center is here to help you. With our range of modern, innovative cosmetic treatments in Illinois, it couldn’t be easier to achieve your desired look.

You can contact us today to discuss the Dysport procedure in Rockford and Oakbrook Terrace, IL, or to learn more about our other excellent treatment options. Our friendly team is always happy to help, so please don’t hesitate to give us a call if you have any questions about Dysport!

Browse work performed on current and past Kovak patients.

Submit your information below and someone from our office will contact you shortly.

Need some help, but not sure where to start? Try our Virtual Consultation to learn about treatment options that might work best for your personal situation.

CONNECT WITH US ON SOCIAL!

*Results can vary based on patient. The material contained on this site is for informational purposes only and is not intended to be a substitute for professional medical advice, diagnosis, or treatment. Always seek the advice of your physician or other qualified health care provider.

This website uses cookies to improve your experience while you navigate through the website. Out of these cookies, the cookies that are categorized as necessary are stored on your browser as they are essential for the working of basic functionalities of the website. We also use third-party cookies that help us analyze and understand how you use this website. These cookies will be stored in your browser only with your consent. You also have the option to opt-out of these cookies. But opting out of some of these cookies may have an effect on your browsing experience.
Necessary Always Enabled
Necessary cookies are absolutely essential for the website to function properly. This category only includes cookies that ensures basic functionalities and security features of the website. These cookies do not store any personal information.
Non-necessary
Any cookies that may not be particularly necessary for the website to function and is used specifically to collect user personal data via analytics, ads, other embedded contents are termed as non-necessary cookies. It is mandatory to procure user consent prior to running these cookies on your website.
SAVE & ACCEPT

Fill this in to claim your free Emsella trial treatment offer:

One step away from receiving $1,000 off CoolSculpting!

You are one step away from claiming your amazing offer!

You’re one step away from claiming $500 off your VLR Treatment!